PLC Ladder Program to carry parts to three positions using the lift.
Control Specifications
The following operation should be performed in this unit.
Study the required specifications and then create the program and confirm the operation
Overall control
When [PB1] (X20) on the operation panel is pressed, Supply command (Y0) for the hopper is turned ON.When [PB1] (X20) is released, Supply command (Y0) is turned OFF. When Supply command (Y0) is turned ON, the hopper supplies a part.
·
Lift Control
1)When the sensor for Part on lift (X3) in the lift is turned ON, a part is carried to either of the following conveyors according to its size.
• Large part: Upper conveyor
• Medium part: Medium conveyor
• Small part: Lower conveyor
2) Lift up command (Y2) and Lift down command (Y3) are controlled according to the lift position detected by the following sensors.
• Upper: X6
• Meddle: X5
• Lower: X4
3) When a part is transferred from the lift to the conveyor, Lift rotation command (Y4) is set ON.
4)     After a part is transferred, the lift is to return to the initial position and stand by.

In this exercise, the size of parts carried on the conveyor is to be sorted using three sensors shown on the table.
The lift stop position is determined based on the input status of the position sensors X4 to X6. When distributing a small part, the lift does not move vertically. Only the rotation of the lift  should be controlled in the initial position.
Turn ON [SW1] (X24) on the operation panel. Result >>The conveyor moves to the right.
Press [PB1] (X20) on the operation panel.
Result >>A part is supplied from the hopper.
Operation of the lift
Result >>When a large or medium part is put on the lift, the lift moves up to the upper or middle conveyor and stops. When a small part is put on the lift, the lift remains in the initial position
·
Transfer of a part
Result >>After the
lift rotates and a part is transferred to the conveyor, the conveyor moves to the right and the part is carried to the tray.
·
Return of the lift
Result >>The lift with no part returns to the initial position and stops there.
·        Repeated operation
When [PB1] (X20) is pressed, the operations starting from 2 are repeated. 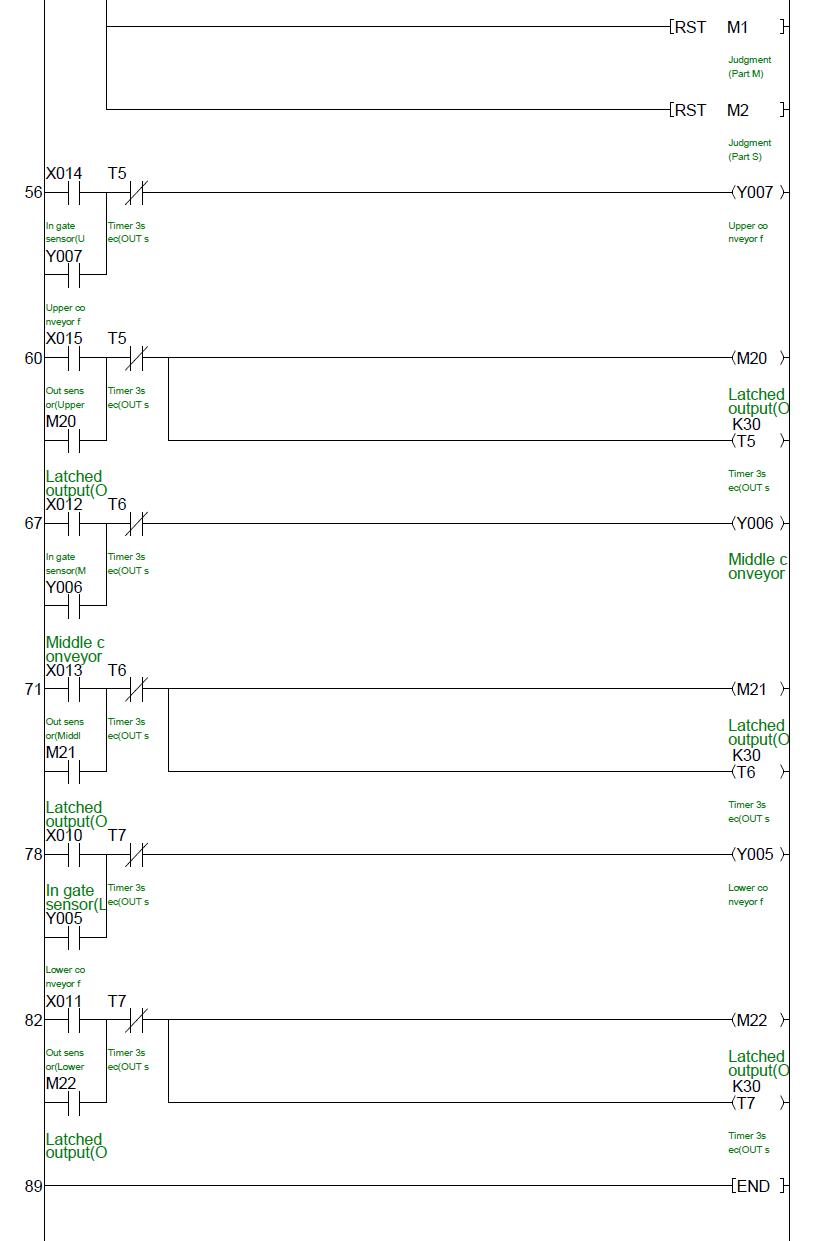