Ladder Programming example  To distribute each part to its proper destination according to its size
Control Specifications
The following operation should be performed in this unit.
Study the required specifications and then create the program and confirm the operation.
1) When [SW1] (X24) on the operation panel is turned ON, the conveyors move forward. When [SW1] (X24) is turned OFF, the conveyors stop.
2) When [PB1] (X20) on the operation panel is pressed, Supply command (Y0) for the robot is turned ON. Supply command (Y0) is turned OFF when the robot has moved from the starting point.(The robot will complete the part loading cycle.)
3) The robot supplies large, medium or small parts.
4) Large parts are led to the rear conveyor and small parts are led to the front conveyor. The part size is detected by the input Upper (X1), Middle (X2) and Lower (X3) on the conveyor.
PLC Input and Output List
Ladder Program Description:
·               In this exercise, the size of parts carried on the conveyor is to be sorted using three sensors shown on the above table.
·
In order to sort parts according to the size, the size detection data should be stored. Each part is distributed to the proper conveyor according to its size turning Sorting wing (Y5) ON or OFF.
·
When Y5 is set ON, a part is carried to the rear conveyor and when the Y5 is set OFF a part is delivered to the front conveyor.

Control the ON/OFF status according to the part size.
PLC Ladder Program: 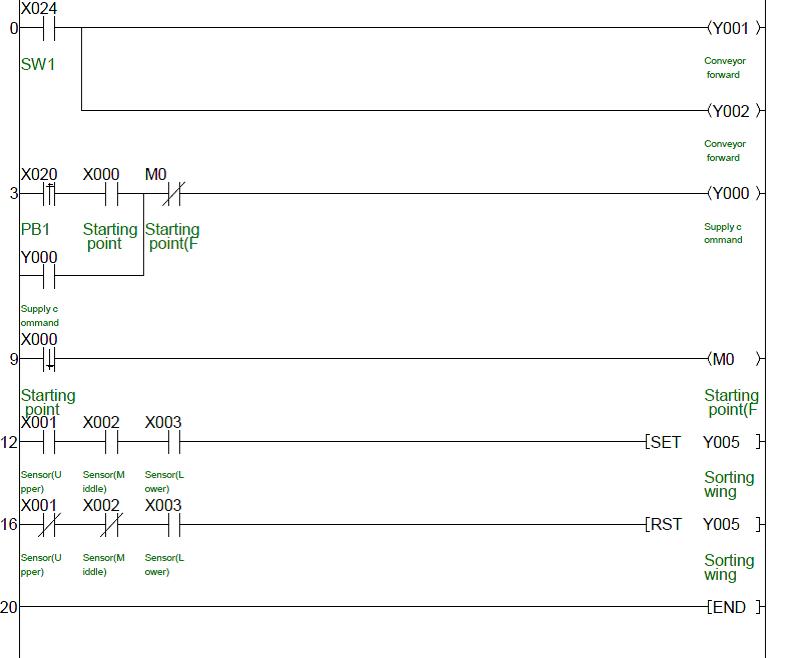